I recently bought a set of Pixel King radio flash triggers for Nikon, (for Canon) for $170, with shipping (2 receivers, 1 trigger).. Pixel King radio triggers are an alternative iTTL compatible flash triggering system. I just had the opportunity to really put them through their paces – inside, outside, on the beach, in the fog and around corners. They came with all kinds of cables and accessories. You can attach the receivers to virtually any manufactures studio system without buying a thing (Normans/Speedtrons excluded). TTL and High Speed Sync (FP) modes worked excellent all day, from the very first shot on.

I used 2 Nikon Speedlight’s, on 2, channels and groups, starting with my default CLS configuration, that was already configured in my camera. I was not able to control the output power levels from the cameras CLS menu (I have a work-a-round). I have not had the opportunity to test maximum range and probably never will, but as far away as 150 feet they worked flawlessly, even in environments where I would have expected electrical interference to be an issue.

– So simple to program. With both Channels and Groups, as per your CLS menu.

– The freedom to move around as you wish is invaluable!!

– They work exceptionally well out of site and around corners, from the camera.

– Small and compact design, easy to carry and use in field.

– Battery life is OK, but not as high as advertized.

– Although I did not have the focusing issues some have complained about, I did experience a little difficulty with this. This was easily fixed with a piece of black electrical tape.

– The transmitter and receivers do look very similar and could be confusing perhaps? (if you were inebriated).

– I wish they had a test button.

How did I ever manage to work at all before these little jewels came into my life! For those of you unaware, the Pixel King flash trigger system is an alternative to the high end systems on today’s market. Such as: Pocket Wizards and Radio Poppers. Having not used an iTTL flash trigger system before, I was of course, very skeptical and anxious to really see what these devices could do for my outdoor lighting.

Before I get too involved with the road test itself, let’s look at the specs and some of the minor details that seem to be easily misinterpreted. First of all, (on Nikons) the triggers do respond to Channels and Groups as defined by the Nikon CLS, Creative Lighting System. However the Pixel King flash triggers cannot be used to control all CLS menu functions, specifically; power/light output. I misunderstood this myself and probably would not have bought them had I been crystal clear on that. I am told this is not the case with Canon systems and that Canon systems may change light output as normal. I have developed a simple workaround to overcome this.

Setup is a breeze. On the transmitter click the channel button, until your desired channel indicator blinks, than let go. Now do the same for the groups. To select more than one group, cycle through all groups once, than subsequently until two or more desired groups are blinking. Now make sure your speedlights are on in iTTL mode. The Pixel Kings also support High-Speed Sync. Both work great in Aperture priority, Shutter priority or Program mode. They still work great in Manual mode, but of course the camera will not automatically make adjustments for the light in manual mode.

A bright sunny day requires the need for a fill light source. Strobes and/or reflectors are the usual preferred by photographers today. Speedlights have quickly become my personal choice, when shooting outdoors or for small locations. They are so quick and easy to setup, move into position and take down, pack up once finished. The Pixel King Triggers, enable me to use my speedlights as I typically work in a studio environment, which in turn makes me more comfortable shooting in the field and more successful too.

Positioning one speedlight in front and one behind my model and we are ready to go. Sounds to simple, right? Well, it is just that simple. The speedlights attached to each Receiver fires, the light is measured by the camera and adjusted as needed using iTTL. But the lighting looks flat to me and I wanted to throw one stop less light on her back, then on the front. As I mentioned earlier; I assumed this CLS function and it is very important to be able to differentiate between the various speedlights. With the Pixel King System from Nikon’s this is not possible, or is it?

Thinking quickly, I decided to attach an umbrella to the unit positioned behind my model, Anne. The umbrella itself should eat approximately one to two stops, equaling less light on the subject from the back and overcoming my Pixel King’s shortcomings with Nikons. The camera still measures and adjusts the light as needed via iTTL, but we tricked the camera’s computer by using a light mod to further adjust our light.

The Pixel Kings are not compatible with Nikon CLS, so you may not use the individual speedlight adjustment from your Nikon’s custom flash menu. The cameras main exposure compensation works as usual, so you have some flexibility there.

Controlling the light output with a single speedlight in iTTL mode is not possible. However, when using two or more speedlights, extending the distance between the light and subject or the addition of light Mods works wonders. Mods are my personal favorite.

Another simple trick is to use your old school equipment with the Pixel Kings. Using older equipment with your Pixel Kings has unique advantages. For example, I’ll take my old Vivatar 883 and set it on Auto, using the F stop selector at approximately a stop or two below that of what my camera has been preconfigured to use. By using my old non-iTTL flash in this way I can allow some movement of my model and still be assured of a nice fill, from my second light. The Pixel Kings extend the range and provide the wireless trigger. You may also use this method in manual mode, when your iTTL equipment no longer functions.

High-Speed Sync, with the Pixel King. 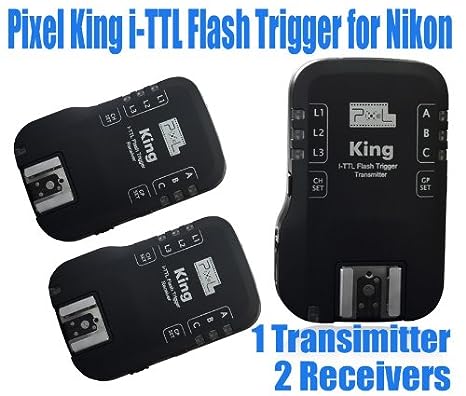 I really love using my new Pixel Kings in High-speed sync mode. They will sync up to an amazing 8000th of a second. I rarely need that kind of shutter speed to freeze a subject, but I often need the speed too shoot with my lens wide open and for more control over depth of field.
Pixel King only supports high-speed sync with Nikon SB-600/700/800/900’s and only with camera models offering high-speed sync as an option.

The ability to work wirelessly outdoors and in the field has made me realize how much I enjoy shooting outdoors and also the freedom of movement, for both myself and my subject. There is just something about that freedom that re-energizes me and inspires creativity.

This error message is only visible to WordPress admins


Error: There is no connected account for the user davedavisphotography. Feed will not update.